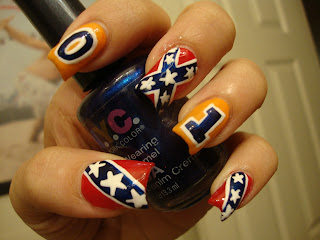 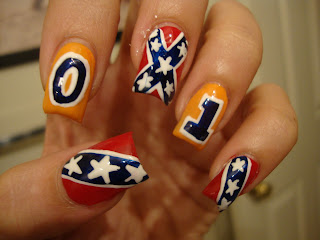 I know, I know, my hand painted stars are poop. But I haven't acquired every color of star glitter yet and my "white" is basically just clear. I love the American Flag! It's my favorite, but I do it quite often, (also red white and blue). My boyfriend Kevin suggested I do the Confederate flag, and I thought it would be a great idea but since I didn't want to paint the same flag on every nail so I incorporated the orange and blue "01" to mimic the side of the Dukes of Hazzard car! Smart, huh? That orange ^^^ is Sunny Side Up by Wet N Wild. I've bought it so many times because I think it looks nice with my skin color... I haven't used it in months, but brought it back to life with some nail polish thinner.

If anyone is wondering why I'm posting 1-3 challenge posts a day... it's because I was sick of the challenge like 3 days after I started it and I'm trying to finish it as soon as possible! I haven't even had time to do any awesome Halloween nails-- It's almost Halloween..!

Also, follow me on my Twitter I'm still trying to figure out how to use it!
Posted by imobsessedwithnails at 7:22 PM 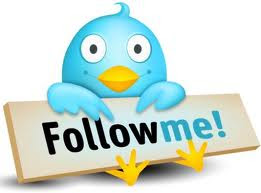 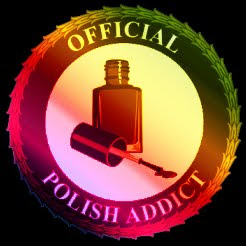 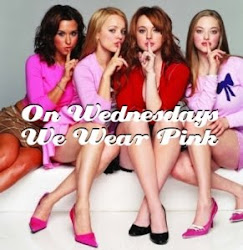 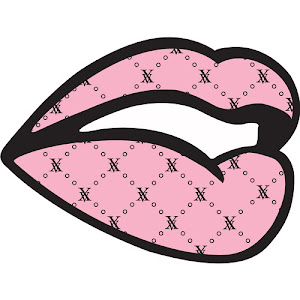 Keep me in your smartphone! 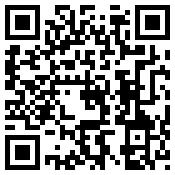 Looking for something in here?